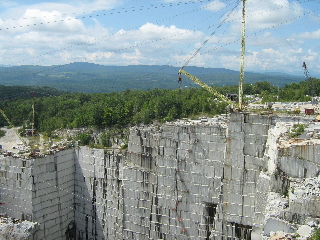 Chartered as Wildersburg, the previous home in Massachusetts of some of the incorporators.

Those people left for one reason or another, or were just outnumbered by later settlers: by 1793 a move was afoot to change the name of the town, because “the name of the township has ever sounded uncouthly to the inhabitants and settlers and it is also disagreeable on account of its length.”

The widely accepted story about the new name is that two Massachusetts men living in the Vermont town, Joseph Thompson of Holden and Jonathan Sherman of Barre, were equally determined to have the new name honor his former home. It was decided that the victor in a wrestling match would decide the new name. After considerable tussling (the Marquess of Queensbury Rules wouldn’t be written for another 72 years) Sherman came out on top and said, “There, by God, the name is Barre. ” Only one thing casts any doubt on the story: the minutes of a town meeting on September 3, 1793, state that it had been decided that the man who gave the most money to the construction of a new church would decide the name. Ezekial Dodge Wheeler was the high bidder at £62, but neither he nor his money have been mentioned since.

However the issue was decided, the name of the Massachusetts town honors Issac Barre, a staunch friend of the colonies in England. During army service in Canada, he developed “many friendships with American gentlemen,” and later, as a member of the House of Commons, was a voice for equitable treatment for the colonies.

Generally speaking, the towns which grew the fastest are the ones with the largest number of place-names. By the beginning of the 19th century, Barre had a half-dozen distinct villages, some of which are now part of the city of Barre when it was split off in 1894. The outlying villages, most of which had sprung up because of the granite industry, remained in the town. With no particularly high peaks, Barre has several smaller hills, some of which turned out to be solid granite, resulting in an industry which has permeated the town ever since.

Goings-on in and near Barre Town
Calendar of Events provided by the Vermont Department of Tourism & Marketing.

Covered Bridge (With Google Maps and satellite images):
Robbins Nest
Click Here for a map of all bridges in Washington County.