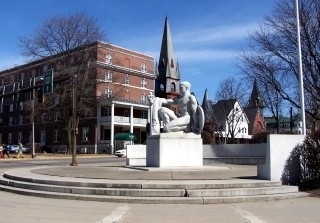 Originally the village of Barre within Barre Town until the Legislature made the division. Information on the naming of Barre is here.

Three brooks came together in a single valley, supplying power for settlers’ gristmills and sawmills and, later on, the granite sheds and other manufacturers. Along these streams, four villages grew up as separate entities:

Thwingsville, derived from James Thwing and his seventeen children, whose descendants became prominent in business and politics. In the early 1800’s, Joshua Thwing established an iron foundry around which the village grew;

Gospel Village was a cluster of houses around a church;

Factory Village was in the vicinity of several tin manufacturing plants; and

Jockey Hollow was the site of a fairground, trotting park, stables and the other hangouts of the sporting element.

Although the separate village identities have long since disappeared into the city, you can still hear old-timers using them as area designations.

Barre is the center of Vermont’s granite industry, home to the Rock of Ages quarries

Goings-on in and near Barre
Calendar of Events provided by the Vermont Department of Tourism & Marketing.

POSTCARD / PICTURESQUE BIARRITZ / THE ENTRY BAR OF A CRUISER