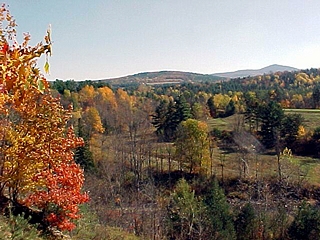 Originally St. Andrews Gore, so named by James Whitelaw, who had come to Vermont to purchase land for a group of Scots who wanted to immigrate. Once he saw them settled, he remained and took an active role in Vermont government (becoming Surveyor General and receiving part of the land now known as Plainfield as payment for his services). It is reasonably certain that he named it for either the Scots town of St. Andrews or the University of St. Andrew.

Local lore has it that one James Chapman, who had purchased land here and was planning to move from Montpelier, disliked the name St. Andrews enough that he offered to buy the town a new set of record-keeping books if he would be allowed to choose a new name for the town. The offer was accepted, and in November of 1797, the town was renamed Plainfield after his former home in Connecticut. Where the name is quite descriptive of the Connecticut town’s topography, it is nothing but wishful thinking in Vermont: Plainfield is anything but level.

The principal village of Plainfield actually lies partly in Marshfield where Great Brook joins the Winooski River. Due south, near the Barre town town line, is a village known as Plainfield Springs (also known locally as Perkinsville), which once served as a destination for the ailing to “take the waters.”

Goings-on in and near Plainfield
Calendar of Events provided by the Vermont Department of Tourism & Marketing.