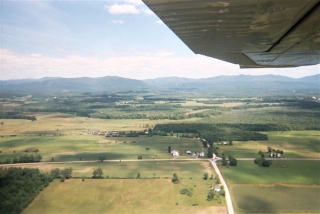 The town was granted to 48 men, five of whom were named Whiting (both the names and the town spelled Whiteing in the grant).

At least two of the Whitings had served with Rogers’ Rangers during the last of the French and Indian wars, as had several of the other grantees. King George III was in favor of land grants to veterans, so Benning Wentworth was on rather more firm ground in granting this town than he was with many others.

The first proprietors’ meeting was not held until nine years after the town was granted, and none of the Whitings ever took up land under their grant. The first settlers had only been in the town a few years when the Revolution began, and during the war the town was abandoned, as were many other towns in what became Vermont.

See Leicester for a little confusion over a rail stop known as Whiting Station.

Goings-on in and near Whiting
Calendar of Events provided by the Vermont Department of Tourism & Marketing.