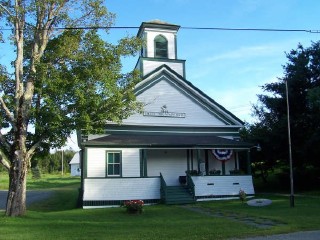 Granted to Nathan Whiting and twelve others. It was the birthplace of Brigham Young, Mormon leader and founder of Salt Lake City, Utah.

The village of Whitingham, on Sadawga Lake, was originally known as Sadawga Springs, and was a popular summer resort. The name may have come from the Mohawk word for “swift water”; local lore has it that Sadawga was the name of an old native who lived there after his people left and the white man moved in.

The village of Jacksonville was originally known as Point Pleasant. It was renamed in 1834, apparently to honor President Andrew Jackson.

Manmade Lake Whitingham, more often referred to as Harriman Reservoir, is formed by the Harriman Dam, named for Henry I. Harriman, the engineer under whom it was contructed in 1923 by the New England Power Company. The reservoir’s construction was the reason for one of the more unique place names in Vermont. See Readsboro for the story.

Goings-on in and near Whitingham
Calendar of Events provided by the Vermont Department of Tourism & Marketing.