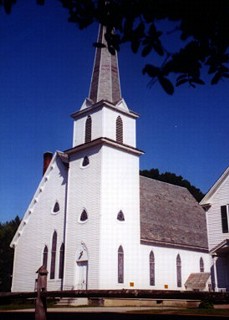 When Benning Wentworth granted Cavendish, eight members of the Cavendish family were in parliament or held positions of authority in the British government. The town probably was named for William Cavendish (1720-64), the fourth Duke of Devonshire, who was one of the most influential peers of the realm. The Duke was married to Charlotte, who was a daughter and heiress of Richard Boyle, the third Earl of Burlington, and a granddaughter of the Marquis of Halifax. At different times William Cavendish was lord lieutenant of Ireland and of Derbyshire and first lord of the treasury. In 1756-57 he was prime minister of England, and from 1757 to 1762 he was lord high chamberlain. The chief village in the Vermont town of Cavendish now is also known as Cavendish, because that name was used for the first post office in town when it was opened in 1800. However, for many years the village was known locally as Duttonsville.

Salmon Dutton came to the new town of Cavendish, Vermont, with his wife, Sarah, from Massachusetts in 1781. The following year he built the home in the village which was to be known by his name. Their house, the first frame building in the lower Black River valley, is now preserved at the Shelburne Museum as a classic example of early Vermont “continuous” architecture. Mr. Dutton was elected town clerk in 1782, and in 1786 he became the town’s first justice of the peace. He also served as moderator of the town meeting, as selectman, and as town treasurer. He is credited with having done the survey in 1784 for the first road from Cavendish to Ludlow (now Vermont routes 103 and 131). In 1812 he gave what was then the enormous sum of $7,500 to the building fund for the Cavendish Academy.

The other large village in Cavendish is Proctorsville, named for the family whose name also was used for the town of Proctor.

Goings-on in and near Cavendish
Calendar of Events provided by the Vermont Department of Tourism & Marketing.

Cavendish Community & Conservation Association
A non profit organization committed to a vibrant Cavendish/Proctorsville community that supports its human and natural resources, building a legacy of health, integrity and vitality for future generations.

This is a basic geographic reference, intended to show relative location of adjacent towns. Directional accuracy is limited to 16 compass points. There isn’t even the slightest suggestion that one can necessarily travel directly from one town to the next (as in “You can’t get there from here”).
Plymouth Reading West Windsor
Cavendish
Ludlow Weathersfield
Chester Baltimore