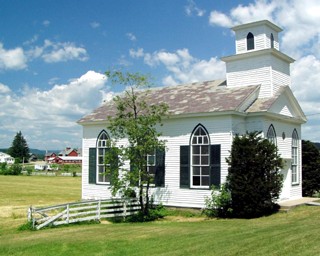 West Haven was taken out of Fair Haven, which had been chartered by Vermont in 1779. Apparently there had been discussion about dividing the town almost from the very beginning. The name West Haven was chosen for the new town at a Fair Haven town meeting in March before the division was actually made. Because the boundaries are taken from Lake Champlain on the west and the Poultney River on the east, the town protrudes into New York like a peninsula.

Either because the two towns taken together had so few people (a total of 545 in 1791) or because there was some doubt about the division, Fair Haven and West Haven were required by the legislature to share one representative for thirty-one years, until West Haven was finally given its own seat in 1823.

Goings-on in and near West Haven
Calendar of Events provided by the Vermont Department of Tourism & Marketing.