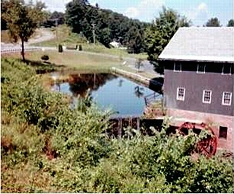 Vernon has one of the most involved histories of any town in Vermont. Originally the area was included in the Massachusetts grant for Northfield, which was made in 1672, and some Vernon land titles actually derive from that grant. The area was later part of the Equivalent Lands (given by Massachusetts in exchange for land that colony had mistakenly sold). Later still, in 1736, Massachusetts granted Fall Town (sometimes Fallstown), and that grant also covered part of Vernon. In 1753 New Hampshire had granted Hinsdale, on both sides of the Connecticut River, including part of modern Vernon. When the river was established as the boundary between New Hampshire and Vermont, there were established separate but neighboring towns in separate states, both named Hinsdale. By the beginning of the 19th Century, the people of Hinsdale, Vermont were tired of having the same name as their neighbors across the river, and in October, 1802 the Vermont legislature changed the town’s name to Vernon.

Soon after Massachusetts made the 1736 grant, two forts were built by men who had received lands under that grant. Josiah Sartwell built his fortified residence within the present town of Vernon. Fort Sartwell, as it became known, was the site of several Indian raids and attacks. During one of the raids, Sartwell’s daughter, Jemima Sartwell Phipps Howe, was taken captive, along with her seven children, and Howe was killed. She eventually was returned home and lived to marry again, her last husband,being Amos Tute, who died in 1790. The epitaph on his gravestone has often been cited as one of the most high-minded in the area:

Were I so Tall to Reach the Pole
Or grasp the Ocean with my Span
I must be mesuer’d by my Soul
The Mind’s the Standard of the Man.
Fort Sartwell stood until 1837, at which time it was torn down and some of the timbers were used in a new building.

About the same time that Josiah Sartwell built his fort, Orlando Bridgman built another fortified home, also in Vernon. However, his fort fared less well than Sartwell’s. Fort Bridgman was burned and rebuilt in 1747, and then it was captured and destroyed for the last time in 1755.

When New Hampshire granted an area on both sides of the Connecticut River in 1753, it named the town for one of the valley’s most illustrious pioneers: Ebenezer Hinsdale came from a Deerfield, Massachusetts family. His mother was one of the people taken captive in the famed Deerfield Raid in 1704. Hinsdale graduated from Harvard and later was ordained in Boston’s Old South Church in order to become a missionary to the Indians in the Connecticut valley; he was also chaplain of Fort Dummer, then the biggest trading post in the area. Very shortly, he became a colonel in the army and a trader instead of a missionary. He subsequently received land in many different New Hampshire grants, including Hinsdale.

According to a story told in Hemenway’s Gazetteer, Vernon got its name through the intervention of a woman. The townspeople had decided that they wanted the name changed to Huntstown after Arad Hunt, one of the town’s most prominent citizens: justice of the peace for many years, the town’s first representative to the Legislature, and earlier a member of the Council of Safety. As the story (perhaps apocryphal) goes, the townspeople charged their town representative to ask the legislature for the Huntstown name, but the legislator’s wife thought that name was too ordinary and told him to ask for Vernon instead. That he did, and the lthe town was renamed Vernon in October 1802. It is thought that the wife had Mount Vernon (George Washington’s home) in mind; Washington had died in 1799 and was buried in a tomb on that estate (named by Washington’s half-brother, Lawrence, who had served under Admiral Edward Vernon, the British naval hero).

Goings-on in and near Vernon
Calendar of Events provided by the Vermont Department of Tourism & Marketing.