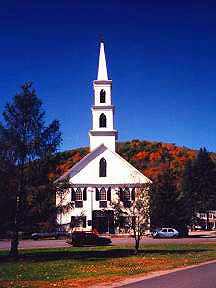 The town was granted as Fane (spelled both Faine and Fane in the Grant), but the French and Indian War prevented the first town meeting from taking place within the required five years. On November 3, 1761, Benning Wentworth issued an entirely new grant for the same town, this time calling it New Fane. Some of the grantees in the original charter are named in the second one, many are not. One notable named in the first grant but not in the second was none other than John Adams, who would become the second President of the United States.

An oft-repeated story attributes the name to one Thomas Fane (a player during the reign of Queen Mary two hundred years earlier) which is entirely incorrect. Rather, it was John Fane, one of Wentworth’s English relatives whom he admired greatly: Earl of Westmorland and keeper of the Wentworth estates at Rockingham. Wentworth had also named Westmoreland, New Hampshire for his kinsman; by the time New Fane had been granted, Fane was commanding General of all British military forces and Chancellor of Oxford University.

Originally, the principal village of Newfane (the one word form came into use very early) was on Newfane Hill, a 1,600 cone rising from the center of the town. The town’s first post office was opened there in 1811. But the hill was almost entirely inaccessible in winter, making it very difficult for anyone who had county business to conduct (Newfane having been named the Shire Town, or County Seat).

At the foot of the hill was a small village called Parks Flat (sometimes Parkville), after Jonathan Park, who had been one of the town’s first settlers. When it was proposed that a new county courthouse be constructed in Parks Flat, the then eighty-two year old Park donated the land, the only stipulation being that the village not be named after him. So, in 1825, upon completion of the courthouse and removal of most of the original hilltop buildings to the new location, Parks Flat was renamed Fayetteville after the Marquis de Lafayette, who in fact visited Vermont that year (see also Barton). The village was renamed as Newfane in 1882.

Goings-on in and near Newfane
Calendar of Events provided by the Vermont Department of Tourism & Marketing.

Covered Bridge (With Google Maps and satellite images):
Williamsville
Click Here for a map of all bridges in Windham County.