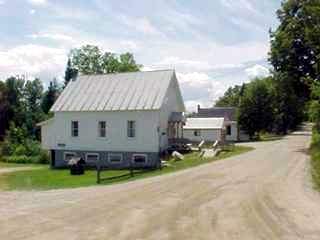 John Manners (1721-70), the Marquis of Granby, came from a long line of distinguished British noblemen, and had himself served as a privy councilor and lord justice. He was bearer of the Queen’s sceptre at the coronations of both George II and George III, but his greatest service was a a military commander in the Seven Years War. It is generally thought that, in addition to the Vermont town, the Granbys in both Massachusetts and Connecticut were named for him.

This Granby got off to a slow start, and after 1816, the Year Without A Summer, the population shrank so much that the town gave up its incorporation. Reorganized and re-incorporated in 1822, it grew to just under 400 residents in 1890, down to 52 in 1970.

Though it was never more than a few buildings grouped around some sawmills, the hamlet of Stevens Mills was a railroad stopping point, and appeared on most maps throughout the first part of the 20th century. The name came from the sawmills operated by C.H.Stevens Company, which had its offices in St. Johnsbury. At one time the mills employed over 100 men, with an even larger group out cutting timber to feed the mills. As the timber went, so did the population.

Goings-on in and near Granby
Calendar of Events provided by the Vermont Department of Tourism & Marketing.