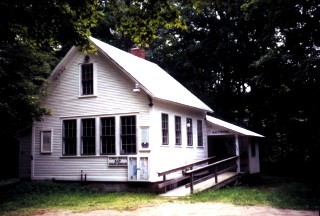 Baltimore was created out of the southeastern corner of Cavendish, that portion being almost totally cut off from the parent town by the long steep ridge of Hawks Mountain.

There has never been a satisfactory explanation for the use of this name in Vermont. The city in Maryland was named for George Calvert, first Baron Baltimore, who was granted that colony in 1632 (no evident connection). The word itself is Celtic for “large town”; appropriate for Calvert’s colony, perhaps, but hardly for this Vermont town. Coincidentally, there is also a Baltimore in Ireland, not much larger than this one.

Starch making was big here in the 1820’s and 1830’s, when the population reached 200; since the Civil War there have been fewer than 100 residents. At just over 3,000 acres, it is one of the smallest towns in the state, and one of a handful which has never had either its own Post Office or a recognizable village.

Goings-on in and near Baltimore
Calendar of Events provided by the Vermont Department of Tourism & Marketing.