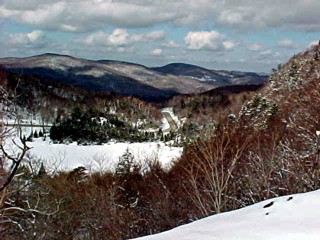 When it was determined that there was no room for a town to match the grant issued on November 4, 1780 to Major Elias Buel (a latecomer to the land speculation business), five other Buels and Ira Allen, the Major was given a “flying grant” to locate an unowned town-sized piece of land wherever he could. They finally had to settle for three separate tracts to make up the equivalent of one town.

A smallish piece in modern Orleans County would be known as Coventry. Near it, Coventry Leg, so named for its odd shape (now part of Newport). At the southern tip of Huntington, a triangular piece known then as Huntington Gore, to be renamed Buels Gore over the Major’s objections (he argued for “Montzoar”).

Charters for all three tracts were issued October 22, 1788, retroactive to the date of the original grant; Buel and his associates were promptly presented a thumping back tax bill covering eight-plus years they had not actually owned the land. Buel eventually lost his share to the tax debt, gave up land speculating and moved to New York.

Buels Gore had its big year in 1840 when the population totalled 18, with 3,500 more sheep than people. There has never been a recognizable village, no post office, and no representative in the Legislature. Like the state’s other gores, grants and unorganized towns, business affairs are administered by a State-appointed supervisor.

The greater part of Buels Gore is taken up by Camels Hump State Forest and other mountains.

The photo above was taken where Route 17 passes between Stark and Baby Stark Mountains, a cleft known as “Appalachian Gap”. The Long Trail crosses Route 17 here, at just under 2,400 feet.

The view is well worth the trip, but I don’t recommend driving anything large or towing anything at all. On the west side (coming from Route 116 just above Bristol), Route 17 starts off gently enough but gets in a couple of extreme hairpins and becomes VERY steep near the top (climbing over 1,000 feet in about 1.5 miles, as the crow flies). On the east side (coming from Route 100 below Waitsfield), it’s a tad easier, but not by much. On the other hand, I have followed full log trucks up and down in both directions, so it definitely can be done, but I did not envy the drivers.