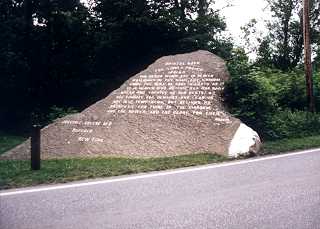 Originally granted as Pocock, after Admiral Sir George Pocock, the son of an English Vicar, who joined the navy at the age of 12 and rose steadily through the ranks to command the fleet which had just taken Havana from the Spanish. The rank, title and £122,000 were his reward. He later married a descendant of Sir Francis Drake.

Renamed Bristol in 1789, generally believed to be after Bristol, Rhode Island (which is, in turn, after the English city and county, where the name means “place by the bridge”).

The nearly solid rock area known as Hell’s Half Acre is the focal point of the hundred-plus year old story of an old Spaniard, who claimed that when he was very young, his father and others had mined a vast amount of silver in the mountains and hid it against their eventual return. The Spaniard never found the silver, and every subsequent generation has seen a number of other searchers trying. As a result, the area is honeycombed with tunnels and pits.

Once simply Bristol Pond, the largest body of water is now known by the somewhat more fanciful Lake Winona, after the mother of Hiawatha in Longfellow’s poem.

Goings-on in and near Bristol
Calendar of Events provided by the Vermont Department of Tourism & Marketing.