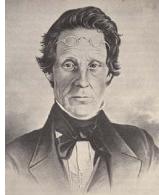 Popular misconception has it that the Morgan Horse, the State Animal of Vermont, was bred by Justin Morgan. The fact is, while he was a horse breeder and farmer, he had absolutely nothing to do with it: the horse was accepted a payment of a debt. Morgan was also a composer and singing master, born in West Springfield, Massachusetts..

Morgan walked the horse known as “Figure” from Massachusetts to his home in Randolph in 1795 and was rented to Robert Evans, a local farmer who used the undersized (14 hands) horse for all sorts of work, at which he excelled.

Morgan died of tuberculosis three years later, unaware that an equine breed would be named for him. “Figure” changed hands several times, somewhere along the line was renamed “Justin Morgan”, and sired numerous offspring before he died in 1821 at the age of thirty-two.

Sturdy, alert Morgans, exceptional in their endurance, distinguished themselves in the Civil War, carrying the First Vermont Cavalry in battle. A Confederate soldier captured by this unit was heard to exclaim, “It was yer hosses done likked us!”

The late Joseph Battell’s Morgan Horse Farm in Middlebury is now a breeding and training center operated by the University of Vermont and is open to visitors. 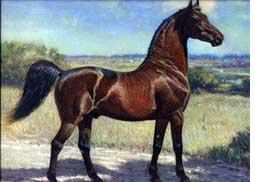