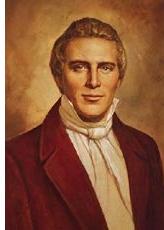 Founder of the Church of Jesus Christ of Latter-Day Saints (commonly called Mormons), born in Sharon. He received his first “call’ as a prophet at Manchester, New York, in 1820.

Smith said he was told of a sacred religious record on golden plates, with two stones which would help to translate it, and in 1827 this was delivered into his hands. The Book of Mormon (1830) is said to contain a history of the 5th century of the Christian era, written by a prophet named Mormon, during which Jesus Christ appeared and established his Church in the New World.

Smith claimed to have received authority from John the Baptist and the apostles to be the instrument of the Church’s re-establishment. Despite ridicule and hostility, the new church rapidly gained converts. He founded Nauvoo, Illinois, in 1840, becoming mayor.

Violence followed his announcement as a candidate for the US presidency. He was imprisoned for conspiracy and killed by a mob which broke into the jail in Carthage, Illinois, where he and his brother Hyram were awaiting trial.