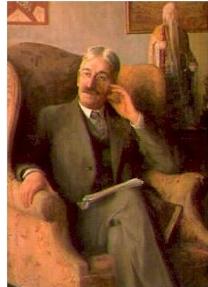 After graduating from the University of Vermont, he taught high school before taking his Ph.D. at Johns Hopkins. He taught philosophy at the Universities of Minnesota and Michigan and gained reputation for his 1887 book Psychology before going to the University of Chicago (1894-1904) where in 1896 he established a Laboratory School to put his educational theories into practice.

His best known innovation was what he called learning by “directed living,” emphasizing workshop-type projects to combine learning with concrete activity and practical relevance. He would long be regarded as the father of progressive education, though not the first to promote this kind of schooling.

As professor of philosophy at Columbia University (1904-30), he was gaining a reputation as one of the leading exponents of pragmatism (the school of philosophy that stresses the practical application of ideas). He helped move Columbia’s Teachers College into the forefront of American education, imbuing several generations of educators with his theories of progressive education and pragmatism.

He did not always make predictable choices in political and international affairs, supporting progressive and socialist candidates while opposing Franklin Roosevelt’s New Deal. He was, however, always opposed to Marxism and communism, and he never abandoned his faith in the individual and democracy.

Author of numerous books (The School and Society (1899), Experience and Nature(1925), Experience and Education (1938), Freedom and Culture (1939)), advisor to various countries’ educational systems, officer of various professional societies, and an intellectual consulted and quoted on a wide range of issues, he played a role in public life that few philosophers in American history have known.