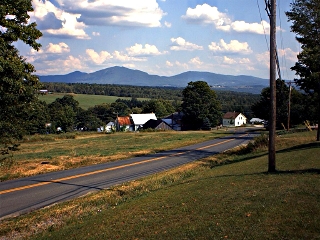 Chartered as Billymead to Dr. Jonathan Arnold of Rhode Island and associates, as were Lyndon and St. Johnsbury, and named for Arnold’s younger son, William. The Oxford English Dictionary says mead is either a beverage made of fermented honey or a meadow. It is more likely the second definition Arnold had in mind when constructing the name (as in “Billy’s Meadow”), but the records show that William leaned toward the first. He became such a drunkard and bully that in later years he completley disrupted town affairs.

By 1810, townsfolk had had enough of Billy and his name, and at town meeting they voted overwhelmingly to change the name to Sutton. They began to use the name right away, not waiting for recognition of the Vermont Legislature, which did not come until two years later. To add to the confusion, just as the Legislature was taking action to recognize the change, postal authorities opened the Billymead post office, and did not change its name to match that of the town until sometime in 1817.

After all that, perhaps it should be noted that one Jocktan Putnam, originally from Burrilville, Rhode Island, was he who proposed the town’s new name. Fortunately for researchers, his own unique name made it possible to trace him to his birthplace: Sutton, Massachusetts.