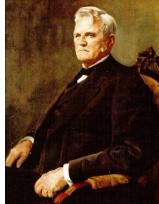 Inventor and manufacturer, born in Rutland.

After his father disappeared enroute to England, Deere was raised by his mother. He received his education in a Vermont primary school, served a four-year blacksmith apprenticeship, and entered the trade in 1825. In 1827 he married Demarius Lamb; by 1836 the couple had four children, with a fifth on the way. Facing bankruptcy, Deere sold his shop to his father-in-law, and departed for Illinois.

With a partner, he designed a series of new plows, which sold modestly during the 1840s.

Noticing the highly polished surface of a used sawmill blade, an idea struck him. From this he designed on his own the first cast steel plow, a major advance that made it substantially easier for farmers to break and turn the heavy soil of the Great Plains. By 1855 his factory was selling more than 10,000 units a year.

Later in life, Deere focused most of his attention on civil and political affairs. He served as President of the National Bank of Moline and a director of the Moline Free Public Library. He was an active member of the First Congregational Church, and served as Mayor of Moline for two years. He continued to manage Deere and Co., manufacturers of agricultural

JOHN WILLIE • THE RACE FOR THE GOLD CUP IN FRENCH • NEW •