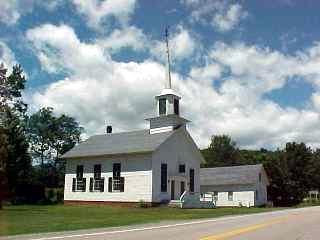 One of ten towns Benning Wentworth granted in the course of one busy day. Many of those towns fell in what has become Chittenden County, and were bargains for the buyers. The other towns, outside of Chittenden County, were strong on rocks (see also Roxbury) and short on farmland, which was then the only marketable real estate. The early Yankee had little use for scenery, unlike his modern counterpart, who will never understand as did his predecessor that a view was a mighty cold thing to own.

Duxbury had lots of rocks and impressive scenery, but it was (and still is) a darned cold place in winter. The Winooski River forms the town’s northern boundary, and in that area there was some good farm land, most of which has since been usurped by the railroad, US Route 2 and Interstate 89. A valley to the east gave the proprietors some tillable land, but most of the town was hills, peaks and mountains, including part of the most beautiful mountain of all, Camels Hump.

Duxbury is not a common place-name, there being only two other towns in the US with the same name. Duxbury, Massachusetts, unquestionably provided the source for the Vermont name, but historians have told several different stories to explain the older use of the name. The Massachusetts town was settled by Elder William Brewster, Miles Standish, John Alden and others, incorporated in 1637 as Ducksburrow. The most plausible explanation is that this was the way the settlers rendered Duxborough, which was the name of the Standish family seat in England. Writing in the 19th Century, one amateur historian offered a fanciful explanation: in old Saxon dux was “chieftain” or “leader” and bury meant “fortified place”, hence Duxbury, “the leader’s fort.” This bit of folklore has been repeated so often that many people actually believe it is the origin of Duxbury’s name.

A third explanation has been offered. The name of neighboring Roxbury, Massachusetts, was spelled Rockesbury in its charter, and may just possibly have been named for the rocky nature of the terrain. Taking Roxbury as a clue, one can guess that the Duxbury name (as “Ducks-bury”) might have signified that large flocks of ducks were seen in the area. Of the three choices, we prefer the explanation that includes the Standish family connection.