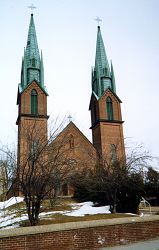 The name comes from the Abenaki for “wild onions”, plentiful along the river. The earliest European documentation offering a written approximation of the native word are French-made maps, which identify the river as “Ouinousqui”.

In the southeast corner of Colchester was a fine natural falls in the Winooski (then Onion or French) River (more River info here) where Ira Allen, one of the grantees of Colchester, built grain and lumber mills in about 1772. To protect their interests from marauding French and Indians, he and his cousin Remember Baker built a two-story palisaded enclosure which they called Fort Frederick. Good land nearby attracted settlers, and the community which grew up around the mills and the fort became known as Allen’s Settlement, later as Winooski Falls, then simply Winooski when it was incorporated as a civil entity separate from Colchester.

The large number of French Canadians who came to work in the textile mills in later years resulted in a portion of the city being referred to as French Village.

In the late Seventies, it was suggested that Winooski be covered with a dome as a means of saving energy, snow removal and other municpal costs. The suggestion was especially interesting to Community Development Director Mark Tigan, who vigorously investigated the possibility, making national (and apparently, worldwide) news in the process. More than one aaplication to the US Department of Energy, asking for funds to study the idea, were turned down, and the enthusiam went away. But that’s not the end of it…

In July of 2008, Virtual Vermont Internet Magazine received an inquiry from Chen Bai of Shanghai, asking for information on Winooski’s “giant umbrella.” Seems that Bai’s daughter’s 6th grade textbook contains a writeup about a clear plastic umbrella covering the city (supported by an 11-story central tube) which can be opened and closed at will. The story is apparently quite popular in mainland China. Bai sent pictures of the textbook cover and the article itself, along with a translation (all available here). The texbook even contains an artist’s concept of what Winooski looks like, complete with hot air balloons, under its umbrella (there’s no resemblance that we can discern). We provided Bai with the real story. See this article from the Burlington Free Press.

Goings-on in and near Winooski
Calendar of Events provided by the Vermont Department of Tourism & Marketing.