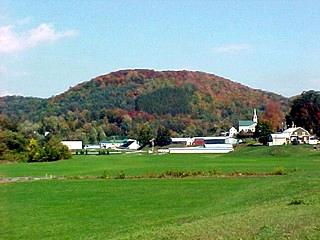 Tunbridge was likely named for one of the most prominent members of British establishment at the time the town was created: William Henry Nassau de Zuylstein (1717-81), fourth Earl of Rochford, Viscount Tunbridge, Baron Enfield and Colchester. Additionally, the town is in Orange County, which is named for de Zuylstein’s great grandfather, King William III (William of Orange). Swift substantiates “likely” by pointing out that Benning Wentworth granted Enfield, New Hampshire the same year and Colchester,Vermont two years later. Oddly, he never granted a town named Rochford.

De Zuylstein’s secondary title is derived from the old “royal borough” of Tunbridge Wells (sometimes Royal Tunbridge Wells), and therein lies an odd coincidence: the discovery of mineral springs in the 1600s made England’s Tunbridge a fashionable resort for the titled and wealthy, and such springs were discovered in Vermont’s Tunbridge in the 1800s, making it a similar destination for many years.

The town is home to the Tunbridge World’s Fair, once of such sleazy reputation that parents ordered their children to stay away (once so wild and wooly that “sober” individuals were turned out as “nuisances”). The fair has cleaned up its act of late, and over the past several years has become one of THE annual events to attend in Vermont.

Tunbridge was also home to Fred Tuttle, a retired farmer who, in 1996, starred in the independent (Vermont-produced) film “Man With a Plan”, documenting his fictional shoestring effort to be elected to Congress. It was quite a story in 1998 when Fred actually ran in the Republican Senatorial primary against Jack McMullen, a wealthy flatlander who had established residence in Burlington solely for the purpose of getting elected to office. Tuttle won the nomination and, knowing there was no way he could defeat longtime incumbent Democrat Pat Leahy, immediately gave Leahy his support, thus demonstrating that Vermonters don’t take kindly to carpetbaggers (is anyone from New York reading this?). Appearing on “The Tonight Show” with Jay Leno, Fred revealed that his campaign had cost him a grand total of $16. Fred passed away October 4, 2003, at the age of 84.

Goings-on in and near Tunbridge
Calendar of Events provided by the Vermont Department of Tourism & Marketing.