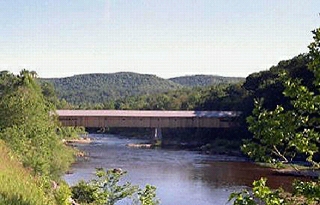 In its charter the town was named Fullum, and it is thought that Benning Wentworth intended the name to have been Fulham, for the town of that name in Middlesex, England. “Fullum””and “Fulham” would have been pronounced alike, and the spellings used in the Wentworth charters are noted for having been more phonetic than precise. Fighting with the French and Indians made it impossible for the grantees to establish a settlement within five years, as was stipulated in the original grant, so Wentworth renewed the grant three times: in 1760, 1781 and 1764.

The name Dummerston was adopted very early, and used almost exclusively for the town. However, it had apparently never been changed officially, so the 1937 Vermont legislature made legal confirmation of the fact that the town’s name was, and had been, Dummerston for over 150 years.

The town was named for William Dummer of Massachusetts, who was one of three sons of Jeremiah Dummer, a wealthy and politically prominent 17th Century Boston silversmith, artist and magistrate. In the early 1720’S William Dummer became chief magistrate of Massachusetts, and one of his many accomplishments in that office was a treaty with the Indians which kept peace in the colony for almost twenty years.

When Connecticut sold the Equivalent Lands at auction in 1716, William Dummer and William Brattle, whose name was given to Brattleboro, bought part of the area that now makes up Dummerston, as well as some of the adjoining towns. In 1723 the Massachusetts General Court voted to build a fort north of Northfield, Massachusetts, to protect the frontier settlements. A fortified blockhouse was built the following year at a cost of £256 and named Fort Dummer in honor of William Dummer, who was then lieutenant governor of Massachusetts, and in fact was acting governor at the time. The site of the fort, which was demolished in 1763, is well over the line in Brattleboro, and now under the waters behind the Vernon Dam.

Today philatelists cherish covers that bear the postmark of Waite, Vermont, because Waite was the only post office ever established in Vermont for the sole convenience of one person. In 1892 Rudyard Kipling married Caroline Balestier and moved to Dummerston, where he built his famed house, Naulakha. Kipling very much disliked the curiosity that was evidenced every time he went to the village, so he took to getting his mail and doing business at Brattleboro. This meant a long carriage trip, and when it was brought to the attention of Postmaster General Wilson that the Kiplings got more mail than Brattleboro’s biggest business firm, the Estey Organ Company, he authorized the establishment of a special post office. Located at the home of Kipling’s neighbors in Dummerston, the post office of Waite was opened in June of 1895, and Mrs. Anna F. Waite was appointed postmistress. In 1896 the Kiplings left Vermont, and in July, 1897 the post office of Waite was closed. Since the Kiplings never returned to Vermont, the office was never reopened.

Goings-on in and near Dummerston
Calendar of Events provided by the Vermont Department of Tourism & Marketing.

Naulakha
Rudyard Kiping’s “Jewel Beyond Price” where he lived while writing The Jungle Book and Captains Courageous.

Covered Bridge (With Google Maps and satellite images):
West Dummerston
Click Here for a map of all bridges in Windham County.