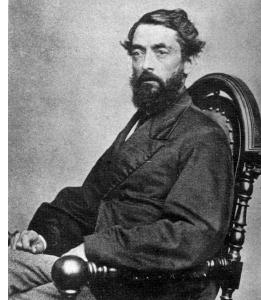 “Father” of the petroleum industry, born in Greenville, New York; he spent his boyhood in Castleton Corners and attended local schools.

Drake worked a succession of jobs in the Midwest and East after leaving the family farm at age 19, becoming a conductor for the New York & New Haven Railroad (1850-57). In the late 1850s he bought stock in George Bissell’s Pennsylvania Rock Oil Company, and in 1857 (taking advantage of his conductor’s job to travel free) he traveled to see the land near Oil Creek (Titusville), Pennsylvania, where surface oil was being collected.

Having observed the drilling of artesian wells in New York and Pennsylvania, he shared Bissell’s idea of borrowing from that technology to drill for oil in Titusville. The Seneca Oil Company was formed with now “Colonel” Drake as president. He secured a lease and began experimenting in 1858, striking oil at 69 feet on August 27, 1859, effectively the first true oil well.

He neglected to patent his drilling invention, a pipe liner for the drill hole, and proved to be a poor businessman, losing his savings to oil speculation in 1863. He drifted for several years, returning to Pennsylvania in 1870, ill and impoverished. The citizens of Titusville collected some money for him and he was voted an annuity by the state legislature in 1876.

Drake had given birth to an industry which would dominate the 20th century, but would die a pauper.

Warning: Invalid argument supplied for foreach() in /home/vermont/public_html/store/ebay-function.php on line 66