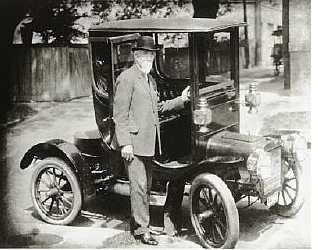 Born in Barton to a hard working farm family, Henry Leland carried into his life the strength and quality of his family’s work ethic, adding to it his gift for and love of precision. He had learned precision toolmaking making rifles during the Civil War and later invented the first mechanical barber’s clippers.

By 1890, Leland was in Detroit. Oldsmobile wasn’t interested in his improved automobile engine, so in 1902 he founded Cadillac to build his own idea of an automobile. He sold Cadillac to General Motors in 1909.

Known as one of the world’s foremost automotive engineers, he won the Dewar Trophy twice (1909 for the concept of interchangeable parts and 1914, with C.F.Kettering, for the automobile self-starter).

In 1917, at the age of 74, he formed the Lincoln Motor Company to build aircraft engines for use in World War I. Needing something to do after the war, he developed the Lincoln automobile in 1919. That company he sold to Henry Ford.

Leland would probably turn over in his grave at the direction Cadillac has been taking with their marketing. Hey, come on: Led Zeppelin music in their TV commercials?