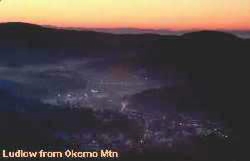 There is no clear trail by which to determine the origin of the name, but given Benning Wentworth’s propensity for naming towns for members of the peerage, the tremendously wealthy Viscount Ludlow is a very good possibility. Some place-name afficianados say it is for Ludlow, Massachusetts; others for Ludlow, Shropshire, England, where the word derives from “hill by the rapid”, which would also fit.

The village of Ludlow, well developed before anyone thought of skiing on Ludlow Mountain, has retained its New England charm. There are many wonderful examples of earlier architectural styles.

Ludlow Mountain officially has been renamed Okemo. That name, too, is of uncertain origin. In Chippewa, it means “chieftain”, preferable to a considerably less complimentary Abnaki word.

Goings-on in and near Ludlow
Calendar of Events provided by the Vermont Department of Tourism & Marketing.

Black River Academy Museum
Operated by the Black River Historical Society, and dedicated to preserving the heritage and traditions of the Black River Valley. The museum’s collections and archives give us a look into the lives of the town’s early settlers. Open Memorial Day through Columbus Day. Admission is free, contributions accepted.

Plymouth Notch Historic District
North of Route 100 on Route 100A is a rural Vermont village preserved virtually unchanged since the turn of the century. The birthplace and boyhood home of President Calvin Coolidge, neighboring homes, church, cheese factory, one-room schoolhouse and general store have been preserved with many of their original furnishings. Coolidge is buried in the cemetery here. Open daily from late May to mid October. There is a small admission fee for adults, children under 14 are free. 802-672-3773.