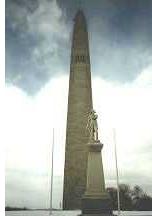 By the end of July 1777, General John Burgoyne’s invasion of New York had progressed as far south as Fort Edward (immediately east of Glens Falls). The plan was to capture Albany and join with other British forces advancing from New York City and the Mohawk Valley. New York would again be under British control and the rebellious colonies would be divided.

However, Burgoyne’s supply lines from Canada were growing longer and less secure. His German mercenaries, mostly Brunswickers (the Americans tended to call all such mercenaries “Hessians”) had no cavalry horses and his army was short of beef, wagons, and draft animals. With little regard for the rebels’ military skills, he proposed that Lieutenant Colonel Friedrich Baum lead an expedition into Vermont and New Hampshire to forage for supplies. Hearing that the American storehouses at Bennington, Vermont were poorly defended, Burgoyne ordered instead that Baum capture them. Half of Baum’s troops were Brunswickers; the remainder were Canadians, British sharpshooters, Tories and Indians.

The intelligence Burgoyne had received was inaccurate. Vermont’s Council of Safety, aware of his approach, had sent out a call for help. New Hampshire had responded by sending 1,500 troops under John Stark. Stark’s men and a smaller force of Vermont militia under Seth Warner were near Bennington as Baum’s expedition was preparing to attack.

Baum set out on the forty-mile trek to Bennington on August 11, but the unmounted cavalrymen in their cumbersome uniforms (plus Baum’s strict adherence to European military formalities) slowed the march. One of his officers later wrote that “one prodigious forest, bottomed in swamps and morasses, covered the whole face of the country.”

The raiders met and drove off a rebel scouting party at Sancoicks Mills on August 14. After dispatching a request for reinforcements, Baum advanced four miles to a hill overlooking the Walloomsac River. Only five miles from Bennington, Baum’s men entrenched on and around this hill, awaiting further American resistance.

After a day of rain, Stark decided on August 16 to send two columns of his troops against Baum’s flanks and rear while the remainder assaulted the front. The attack began at 3:00 pm. Many Indians, Canadians and Tories fled or surrendered after the first musket volleys, but the unmounted cavalrymen held position, fighting off the attackers with sabres. Baum himself died in the battle; Stark would later describe it as “one continuous clap of thunder” which lasted two hours before the hill was finally taken.

Stark’s men had barely cheered the victory when news arrived that Lieutenant Colonel Heinrich von Breymann was approaching with the requested reinforcements. Fortunately, Warner’s Vermont militia arrived in time to meet this advance. The Vermonters pushed back the Brunswickers and pursued them until sundown. “But had daylight lasted one hour longer,” Stark reported later, “we should have taken the whole body of them.”

The British had severely underestimated the strength of the enemy. Baum and over two hundred of his men were dead, and most of the remainder (some 700) were taken prisoner, while only 40 Americans had been killed and 30 wounded. Burgoyne had failed to obtain his needed supplies. His army was thus weaker against the Continental forces at Saratoga, and after two unsuccessful battles he surrendered on October 17, 1777.

Bennington Battle Day is observed on August 16. Vermont could thus be the only State in the Union which, in its one and only official state holiday (government offices are closed and metered parking is free) commemorates an event which did not even take place within the state’s boundaries.

Present-day Charlestown, New Hampshire was once known simply as Village Number 4. The restored “Fort at No. 4” at Charlestown is the fort from which Stark and his troops departed for Bennington.