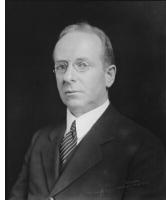 Educator and psychologist, born in Burlington.

Influenced by such teachers as John Dewey and William James, he completed his graduate studies in Europe and spent a year (1893) as instructor in psychology at the University of Minnesota before going to the University of Chicago where he was a faculty member and an administrator (1894-1919), serving as acting president in 1919. While there he began the new psychology department (1905) that became internationally renowned.

A proponent of the “Chicago school” of psychology, known as “functionalism,” he espoused a rationalism that was influenced by John Dewey.

Author of the widely-used textbook Psychology, he went to New York City to head the Carnegie Corporation (1920-21), then became president of Yale (1921-37), where he established residential colleges, strengthened professional schools and the graduate school of arts and sciences, and greatly increased the endowment. Upon retiring he served as an educational consultant to the National Broadcasting Corporation.