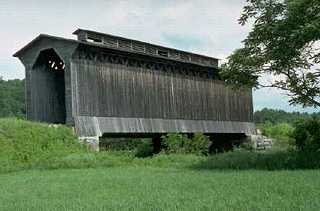 The second-named grantee, General Oliver Wolcott, was held in only slightly less esteem by Vermonters than George Washington. Son of one of Connecticut’s most outstanding colonial officials, he graduated from Yale and became a noted juror in Litchfield. He later served as a Captain in the French and Indian Wars and became a Commissioner for Indian Affairs, in which role he brought about settlement of the Wyoming Valley – New York – Vermont boundary dispute. He was a member of the Continental Congress and a signer of the Declaration of Independence. During the Revolutionary War he rose to the rank of Major General, after which he served as Lieutenant Governor, then Governor of Connecticut. The Allens, the Chittendens and many other early Vermont leaders were from the Litchfield area, and they all knew and respected General Wolcott.

Goings-on in and near Wolcott
Calendar of Events provided by the Vermont Department of Tourism & Marketing.

Covered Bridge (With Google Maps and satellite images):
Fisher
Click Here for a map of all bridges in Lamoille County.