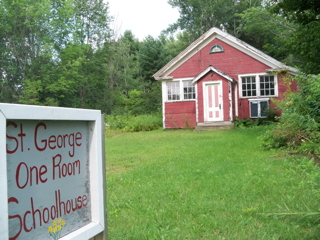 St. George is so small that many think it was originally a gore, but it was, in fact, granted as a town. The name apparently alludes to the King George himself, in what was probably Benning Wentworth’s effort to placate His Majesty.

Old George was definitely in a huff over the way Wentworth was a) handing out grants left and right in conflict with the New York colony’s claim to the lands, and b) not requiring the grantees pay taxes to the Crown. The Royal Governor of New Hampshire was actually profiting more than the King in these grants: 500 acres of each town was titled to Wentworth, not to mention a sizable cut of the “filing fees.”

As with so many other towns, St. George was described in the grant in terms of the boundaries of pre-existing towns, except that there wasn’t really enough land left to make up a proper sized town. This did not stop the grantees from selling land rights: people who thought they owned a thousand acres turned out to own about a hundred.

In its heyday, St. George thrived on sheep raising, until the bottom fell out of the market. Today, a cluster of houses, a cemetery, an old one-room schoolhouse, a mobile home park and a small industrial park identify St. George village near where Route 2A ends at Route 116.

Goings-on in and near St. George
Calendar of Events provided by the Vermont Department of Tourism & Marketing.