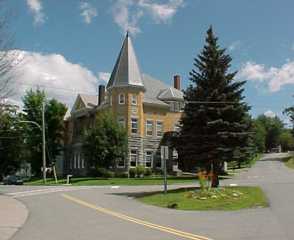 It was not until 1788 that Derby was actually chartered, the document back-dated to when the grant was made by the Legislature to Timothy Andrews (sometimes Andrus in early records) and 59 others.

Himself a carpenter by trade and a land speculator on a big scale in both Vermont and Connecticut, Andrews came from a prominent Connecticut family which produced a number of clergymen, educators and statesmen. He was involved in the charters for a half-dozen towns near the Canadian border, including East Haven, which was named for his home in Connecticut. He died in Vermont 1789, never having taken any advantage from his Vermont holdings.

Just south of Derby, Gatesborough had been granted to Josiah Gates and associates, but the fees were never paid, so the town was sold and chartered as Salem. The Legislature eventually agreed with Andrews’ complaint that some 6,000 acres of Salem overlapped Derby, in addition to which part of Salem was under the waters of Lake Memphremagog. Salem’s proprietors were refunded a portion of the purchase price, but the town never developed into a viable entity. Part of it was annexed to Newport in 1816 (now part of Newport city); the remainder went to Derby in 1880, resulting in Derby’s unusual size and shape

Goings-on in and near Derby
Calendar of Events provided by the Vermont Department of Tourism & Marketing.

The Haskell Opera House
in Derby Line (pictured above) sits astride the international border. The audience, seated in the US, watches a perfomance taking place in Canada.