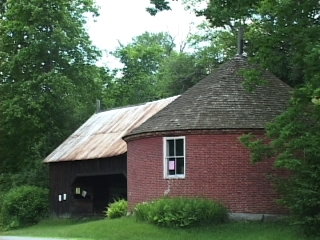 Brookline was created from the southern half of Athens and a small part of the western side of Putney. Subsequently a little piece of Newfane that lay east of West River was added.

The name comes from Grassy Brook, which rises over the line in Athens at Lily Pond and flows in an almost straight line through Brookline from north to south. The first settlers described the area where the brook rises as having been a grassy meadow when they first saw it, hence the name Grassy Brook. Throughout its course through Brookline, it lies in the bottom of a deep valley, where the mountains on either side rise as much as 1,000 feet above the valley floor.

Town records show that in the early part of the 19th Century there were two stores and a hotel at the foot of Windmill Mountain, named so because of a windmill on top of the hill and which provided power to pump water for the hotel and the surrounding businesses and homes.

The long ridge of Putney Mountain is only a little over 1,600 feet high, but it was always an obstacle to east-west travel, which is why the western section of Putney was given to Brookline, and why the mountain is now in Brookline, rather than in Putney.

Dr. John Wilson (1788-1847) insisted on his own design for the 1821 schoolhouse pictured above as a condition of accepting employment as the town’s first schoolteacher. The architecture incorporates an inverted post and beam framework supporting the roof, and is said to be based on the Old Tolbooth on the High Street in Edinburgh, the medieval seat of the disbanded Scottish Parliament and symbol of political independence from England. Upon Wilson’s death, former pupils were surprised to learn that their teacher was actually the notorious Scottish highwayman “Captain Thunderbolt,” with a price on his head dating back to 1816 in the amount of £500 sterling, a small fortune.

Goings-on in and near Brookline
Calendar of Events provided by the Vermont Department of Tourism & Marketing.