Originally intending to become a pharmacist, he took up the saxophone, teaching himself by listening to the recordings of Rudy Wiedoelft. He went to the University of Maine and then Yale, where he formed his own band (the “Yale Collegians”, later the “Connecticut Yankees”). After graduation he adopted his stage name after Wiedoelft and continued with the band. By the late Twenties he began to enjoy great popularity as a vocalist with a genteel style that made him the first to be called a “crooner.”

One of his first hits was The Vagabond Lover, which became his nickname and the title of his first movie (1929). His trademark was a small megaphone he used to amplify his suave, light-toned voice in a time when microphones and electronic amplification were virtually unknown, needing something to be heard over his hysterical female audiences. For three decades he enjoyed a successful career on radio, in movies, in Broadway musicals, and with a solo nightclub act. Bing Crosby’s crooning displaced Vallee’s, forcing Vallee into more screen work, which he did before and after enlisting in the Coast Guard and leading their band during WWII.

His style of singing was out of fashion by the late Fifties, but he enjoyed a reprise in the 1961 hit Broadway musical, How to Succeed in Business Without Really Trying, recreating his role in the 1967 movie version. He also formed a talent agency and music publishing company. 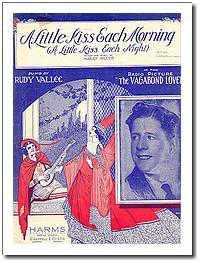