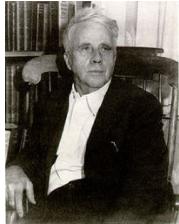 He studied at Dartmouth and Harvard but never took a degree. He was a mill worker and teacher, a farmer in New Hampshire and lived in England for a time (his first volume of poems, A Boy’s Will, was published there in 1913). Upon his return to New Hampshire he settled on a farm but taught at various universities and colleges in the following years.

He was a founder of the Bread Loaf School in Middlebury in 1920 and was poetry consultant to the Library of Congress (1958). He was often honored for his work, and in later years cultivated his image as America’s Poet Laureate, which climaxed in 1961 when he read his poem A Gift Outright at John F. Kennedy’s inauguration.

Those who knew him best admitted that he could be prickly, even downright nasty, but none denied his achievements as a poet. His work is distinguished by its everyday language, New England settings, and the natural world, much of which contributed to strong identification with Vermont.

Poems such as Stopping by Woods on a Snowy Evening, Mending Wall, and The Death of a Hired Man, ensured his popularity as well as critical acclaim.